…of the times, with apologies to Miss Clark. 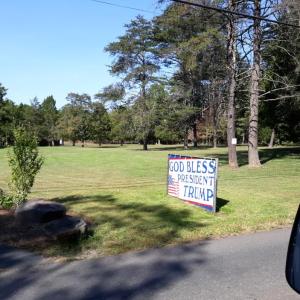 I didn’t get a lot of pictures, but I was watching what signs folks put out.

Short version?  We saw more Trump stickers on really nice cars in Virginia than we saw Biden stickers on the entire trip.

You never see right-wing bumper stickers on really nice cars in the middle of cities, people like to keep their cars and that’s making yourself a target.

I was going to re-make the point that Biden is so obviously blah that there’s a good chance nobody wants to be loud about supporting him but they’ll still vote for him.  I was literally crafting the phrasework as I went to the grocery store, because we needed milk and similar stuff after the Virginia Trip, noting that there was the one big sign for Biden (Iowa Workers!) that’s about two by four foot…when I noticed that there was a yard sign missing.  There’s a pair of houses that has half the Biden signs I’ve seen in our area, and their Biden sign was gone.  Still have the Greenfield (Dem I thought was a Green, she’s so shy of bragging on it in her commercials) and similar signs, but that central Biden one was gone.    There is now a Trump flag on the flag pole.  What the heck did Biden do?!

I did notice a lot of Trump signs, including the one above– somewhere near Bull Run camp ground, I got lost, go figure– but I also noticed that they tend to be placed differently.  It’s not 100%, but as I promised to expand on:

The Dem signs are almost all out by the front of the yard where they can easily be seen from far away– or on public property such as the side of the road, near public parking, on medians, in the public areas that aren’t maintained as part of the park but are legally part of the park, such as between sidewalks and roads.  (I must admit, it’s philosophically consistent with their views.)

The Rep signs are placed more like yard ornaments that might explode, or maybe spontaneously combust; near the door but not TOO close, or sort of sheltered from easy access in a yard, or they are securely placed like one alcove I saw where the U shape around a drainage ditch had (didn’t get a picture) been turned into a Trump and other politicians shrine, with solar lights, because there is NO WAY to reach it other than over the eight foot solid wood fence at the back.  Flags, obviously, are very popular this year.

I have seen now two Trump signs set out exactly like Clinton signs were four years ago, one in the everybody-works-in-DC neighborhood in Virginia and one when I got lost in Columbus, Ohio (yes, it’s a theme– this is why I like my talking map, I can just DRIVE and it’ll get me back to the road…eventually) where a block after the one house with a Biden sign, there’s one with a nearly identical setup…but Trump.  In a neighborhood I’d expect to see a lot of Biden signs in.

We were on the road from Thursday night on, so when we left Iowa Trump hadn’t been diagnosed yet and I had drafted the half-elf into helping me look at stuff; when we came back he identified that someone had, in the meantime, put up a freaking flag pole to fly a Trump flag next to their field.

Lots of home-made pro-Trump signs.  One “Dump Trump” in black spray paint on plywood; a mile down the road was a sign in white spraypaint on a bigger piece of plywood saying something like “the democratic party and their supporters are attempting to institute socialism and are willing to destroy or falsify history in order to do so.”  But phrased more aggressively.  My dear Elf blinked and said something like “well, they’re not wrong….”

This doesn’t mean don’t vote, obviously, and I pray that folks are fighting fraud well enough to keep that from flipping the election anyways, but wow.